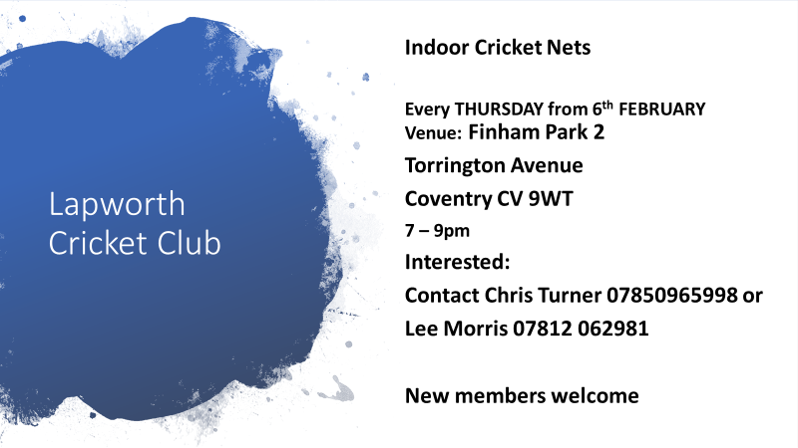 Well what a fantastic season of cricket we have enjoyed – England winning the World Cup at Lords in July on boundary count after a super over, then came The Ashes series, Ben Stokes heroics at Headingley (incidentally I went on Day 2 to Headingley and saw England bowled out for 67!!) After many twists and turns the series was drawn although our arch rivals Australia retained the urn.

It probably wasn’t quite so exciting at the Melson Memorial Ground during the season however it was another very successful season for the Club. Having finished runners up in the Premier Division of the Cotswold Hills League in 2018 we were looking to go one better this season however it was not to be as we again finished in second spot with a strong Exhall & Wixford side topping the pile although when they visited Lapworth we did inflict on them their only defeat of the season.

Our second team were involved in a three way battle throughout the season to secure promotion from Div. 6 of the CHL and although the eventual league winners Broadway secured promotion with one game left on the last weekend of the season nothing other than a Lapworth win would guarantee us promotion, the win was secured along with the runners up spot and the celebrations could begin.

2019 was the year we launched our fledgling 3rd XI playing in Div.7 of the CHL and they had a remarkably good first season. We secured the Alvechurch & Hopwood ground at Hopwood and that’s the venue for our 3rd teams home games. Although we didn’t really threaten to get promotion we did finish in a very creditable fourth spot. We clearly need to build on this success next year.

Our Sunday team enjoyed a full fixture list playing “friendlies” against many local teams in Warwickshire and Worcestershire and they had a mixed season recording some really good wins and also a few defeats – the objective of the Sunday team is to ensure that all the players get involved and the results are of secondary importance.

18 club members went on the first Lapworth CC cricket tour for many years to Cornwall in August playing four games in the Newquay and Redruth area. I am told that the party had a fantastic time, they think!! Certainly, on the playing front it was a success as they won three games and I understand that a number of hostelries in Cornwall recorded dramatic sales increases during a few days in August.

Considerable end of season renovations has been already been completed at The Melson, scarifying and reseeding the square followed by the spreading of two tons of loam being the major job. However, the cricket may have finished but considerable work is completed during the winter months by our Grounds team pruning the trees and hedgerows being just one of the tasks. Then before you know it Christmas will have come and gone, and we will be preparing to start indoor practice for the 2020 season.

More about that in due course ……..