St Mary the Virgin, the parish church of Lapworth traces a history back to the tenth century AD, when a Saxon wattle and wood church stood where the nave now stands. 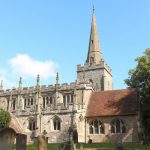 In AD 1100 a stone church existed on the site of the present nave and chancel; the succeeding nine centuries have given Lapworth an outstandingly beautiful and interesting church. Building which “began in the 12th century continued at intervals over 300 years so that the general impression now from the outside, is of a 15th century church,” (A Warwickshire Village Church, by Mildred Tomlinson).

Follow the link above for information about services and other aspects of the Church.

St Michael’s, Baddesley Clinton, is just outside Lapworth’s boundary. It is close by the National Trust property of Baddesly Clinton House. Both Church and house have long and close links with the Ferrers family. 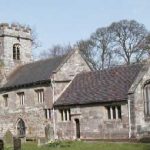 The earliest record of a church is dated 1305, but it is believed there was a church on or near this site two ,or possibly three centuries earlier. The quick tempered Lord of the Manor Nicholas Brome who built the tower as a penance is buried just outside the south door “within the parish church of St James in Baddesly Clinton, there as people may tread apon mee when they cone into the church…” The dedication has changed from St James to St Michael, possibly following 19th century restoration.The rector of Lapworth is also the incumbent of Baddesly Clinton. Sunday services are usually at 09:45 (Holy Communion, first and third Sundays, Matins fifth Sunday) and 15:00 hours (Evensong, second and fourth Sundays).

St Francis of Assisi, though not in Lapworth, is the nearest Catholic Church.  It is located in Baddesley Clinton (some would say Chadwick End) about two miles to the East of Lapworth.  It is a fairly recent building, being completed in

The Parish of the Church of St Francis of Assisi is about 60 square miles (100 square kilometres) and includes many of the surrounding villages.  Times of masses are Saturday (for Sunday) 6.00pm and Sunday 9.30am.  For Holidays of Obligation 9.30am and 7.30pm.  Confessions are Saturday 4.30-5.00pm.

The Lees Chapel, in Station Lane, was founded in 1886 by William Lees as the Kingswood Mission. In 1902 the present chapel was built and named the “Lees Memorial Hall.” The Lees Chapel is affiliated to the Fellowship of Independent Evangelical Churches.

In 1995 a major redevelopment was completed, providing modern facilities for the work amongst young people, access for the physically disabled and new space for an expanding range of activities. Meetings are held on Sundays at 10:00am (Communion – 2nd and 4th Sundays), 11:00 (Family Service and Sunday School), and 18:00 (Evening Worship). On the third Sunday of the month Evening Worship is replaced by a Tea-Time Service at 16:00. This Service is especially suited to those with a learning disability. During the Summer – usually the last Sunday in July and then through August – they meet locally at 16:00 for an Open Air Service.

Meetings are also held on alternate Mondays for Prayer and each Wednesday for their mid-week activity (activities include Bible Studies, Growth Group meetings etc). Meetings for young people are held on Friday evenings, in term time, for various age groups. Lion Cubs for Toddlers and their carers meets each Monday, in term time, from 10:30 – 12:30. Our programme of activities also includes Ladies LinK meetings, Men’s Breakfasts, Saturday Afternoon Teas, specialist meetings for people with a learning disability etc.

St Giles’s, Packwood, the other parish church within the civil parish of Lapworth, has been used for Christian worship for nearly 800 years. 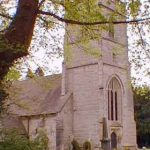 Its nave and chancel date back to the late 13th century, and notable later additions include the tower, known locally as “The Tower of the Atonement,” a reference to the 15 century Lord of the Manor Nicholas Brome who returned home unexpectedly to find the parish priest “chockinge his wife under ye chinne,” and slew him on the spot. As penance, after pardons from Pope and King, he built towers to the churches of Packwood and Baddesly Clinton. In 1704 the brick built transept was added as the Fetherston Chapel: two years later the parents of Dr Samuel Johnson were married at St Giles’s. 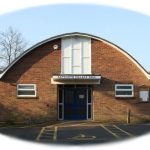 They call themselves Christadelphians, which means brothers and sisters in Jesus Christ (Colossians 1v2).  They try to live their lives according to the principles they learn from their study of the Bible.

Studies and activities are led throughout the week in and around Lapworth by their own members. To find out a little more about them and the ways you and your family can join in, pop in to one of their weekly events, or easier still, drop them a Facebook message.